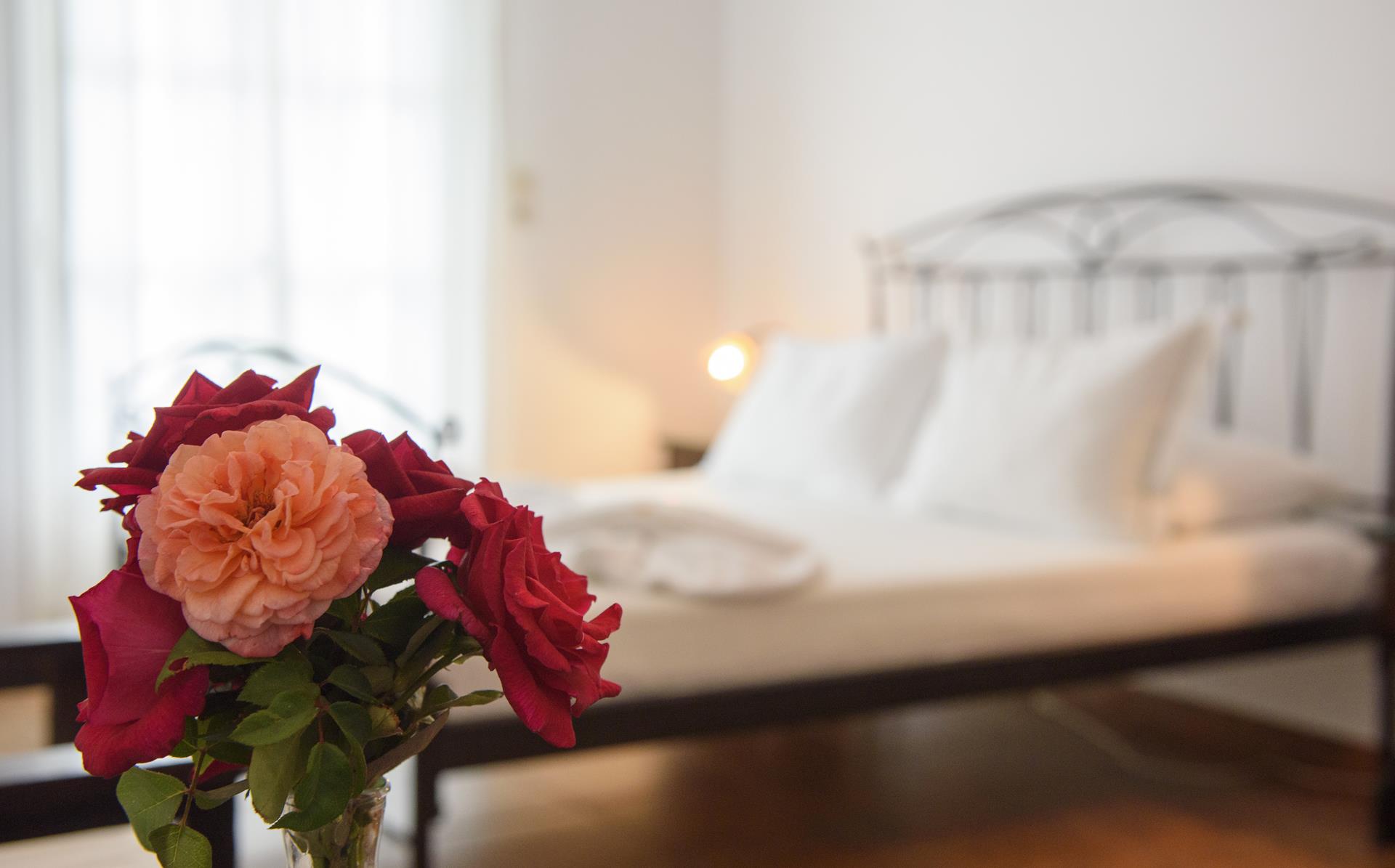 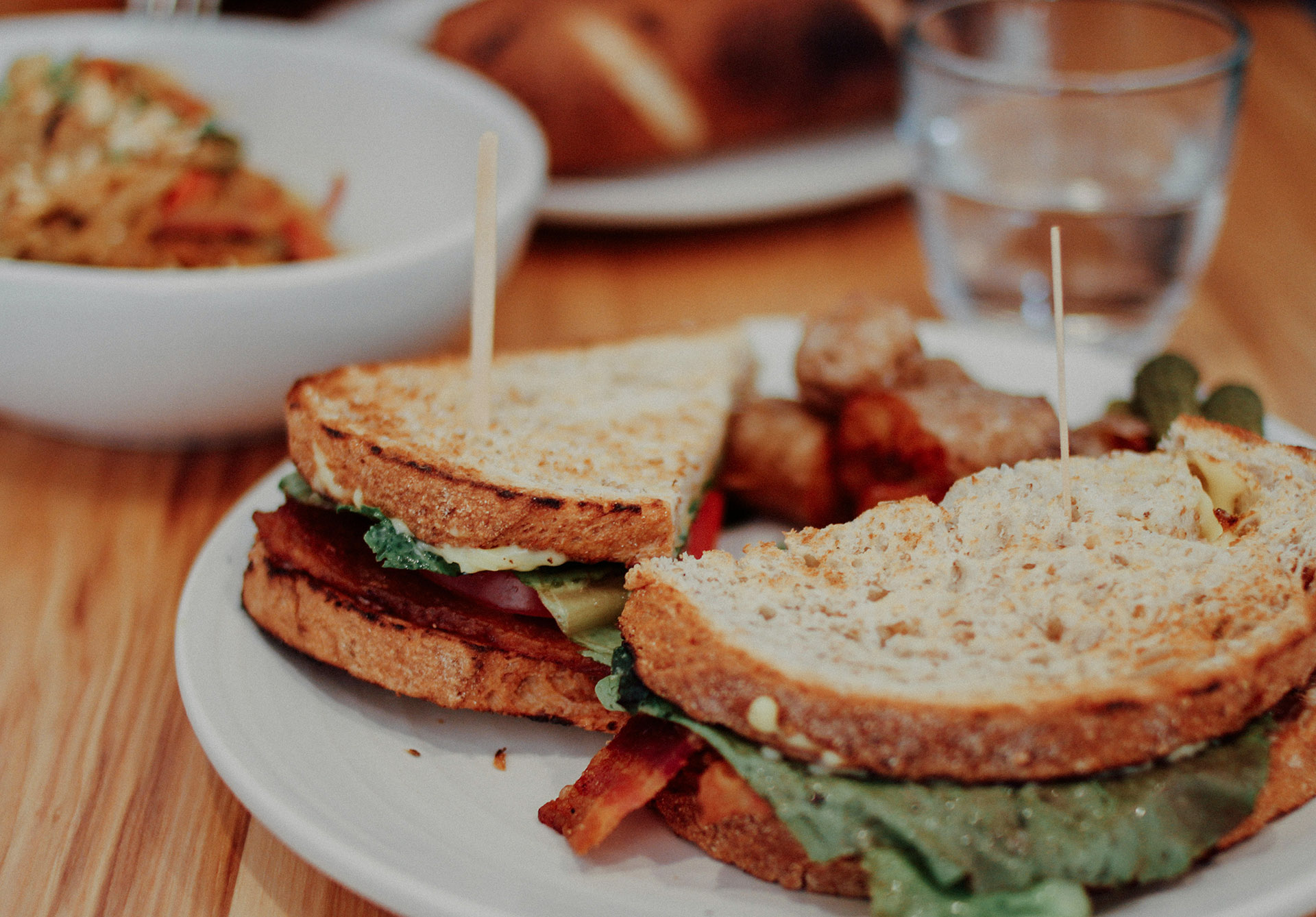 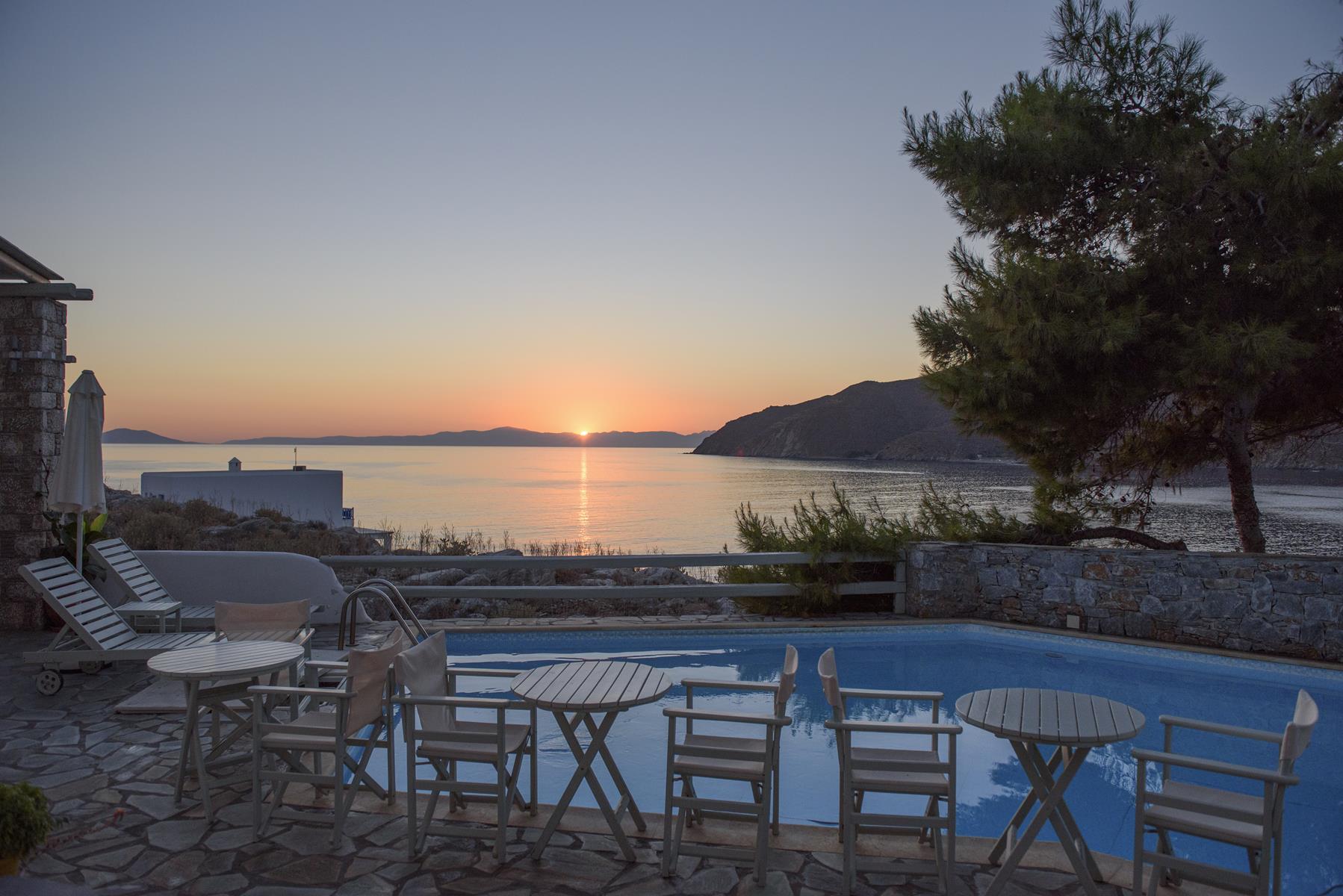 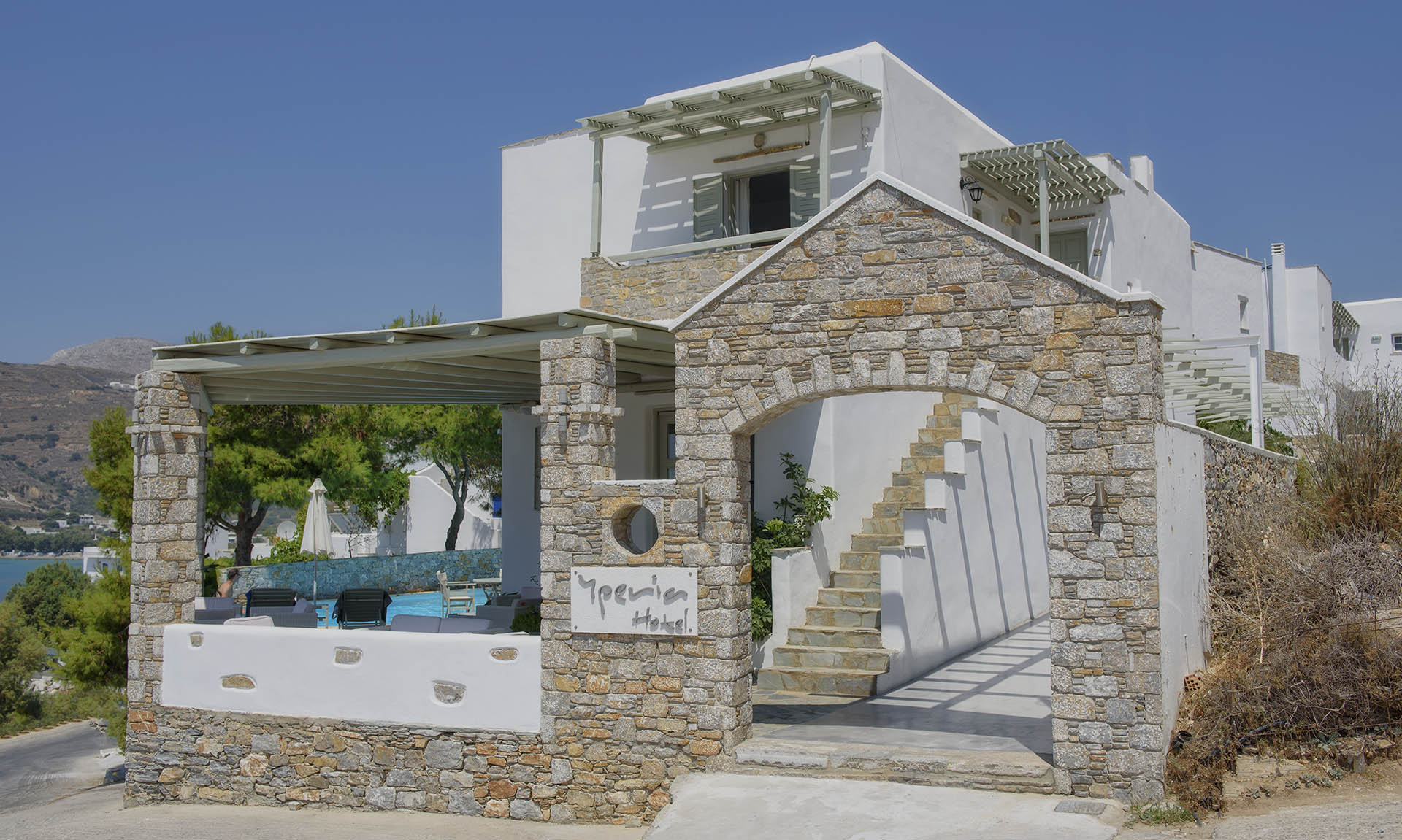 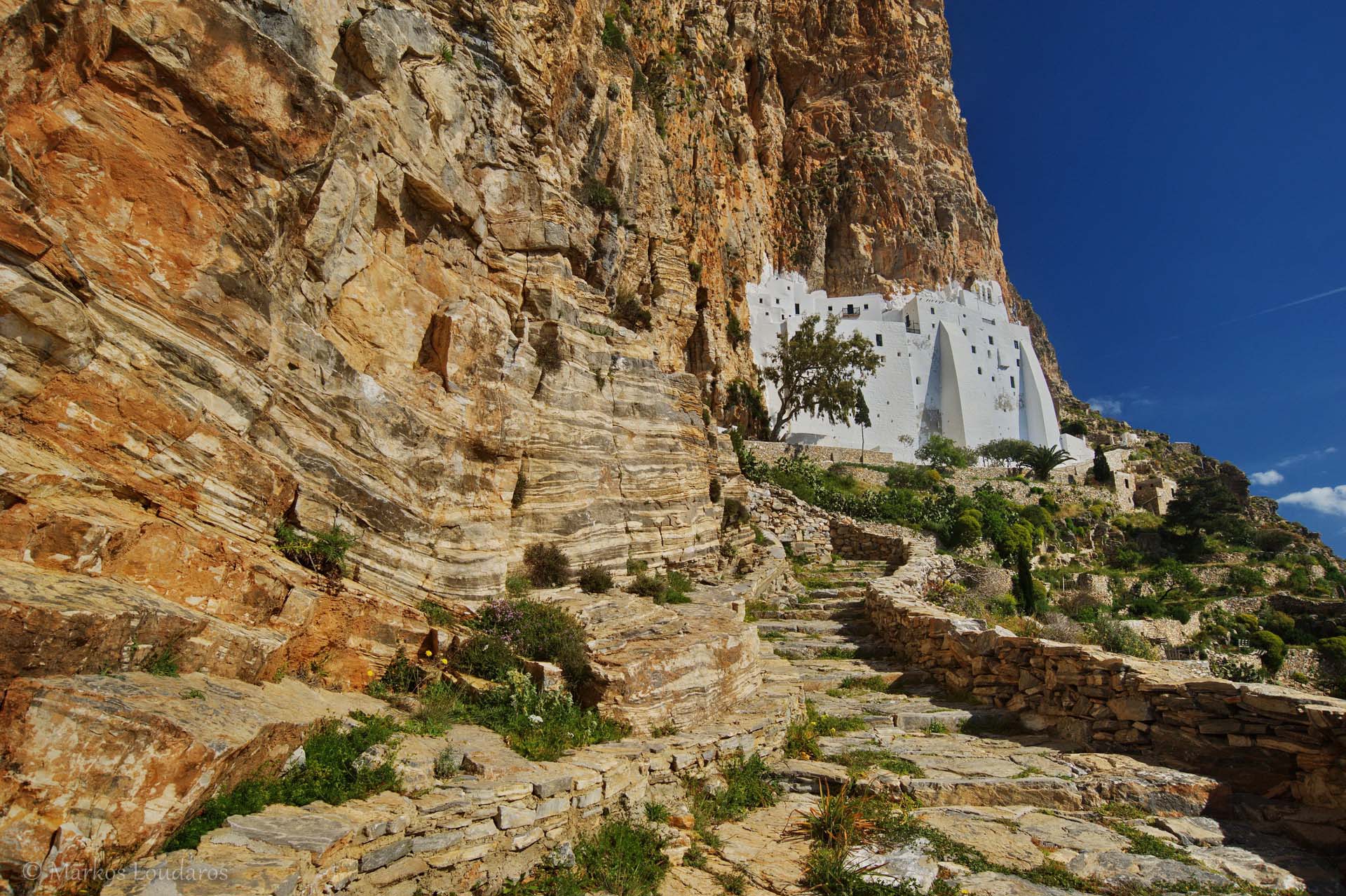 There are 300 steps that separate the visitor from the entrance to the monastery. Another 900 years separate him from the monastery’s establishment. That which unites everyone no matter who visits the monastery is the awe and the admiration for this important work, a memorial hymn for the human faith and will. In a rough landscape of unbelievable beauty and wildness, loyal people overcame their weaknesses and managed what today is known as a small miracle. Built upon steep rock cliffs it hangs into an abyss as if touched by the hand of God. The monastery was built in 1088 and was renovated by the Byzantine emperor Alexio Komnino.

The reason for the erection of the monastery was the finding of an icon of the Virgin Mary, which arrived from Chosovo or Chosova in Palestine. Chosivas or Koziva’s location is found in the Holy lands near Jericho. The persecutions of the Christians in the 9th Century brought as by miracle the icon to Amorgos, a location that is said to have been chosen by the Virgin Mary herself. The renovation and whitewash of the walls all these years have covered important information about the history of the Monastery. During the Venetian rule (1296-1537) many changes and expansions were made leaving behind hints of western influence.

Not even during Turkish rule (1537-1824) was the monastery’s prosperity interrupted. Its fortune allowed the bribery of its religious freedom from the Turkish Pashas. The monastery had shares of Crete, Lero, Naxos, Paros, and Astipalaia as well as the desert islands Kero, Nikouria and Grampoussa.

Stay up to date
Get our emails, news, offers, and much more. Be the first to know.

You can find out more about which cookies we are using or switch them off in settings.

This website uses cookies so that we can provide you with the best user experience possible. Cookie information is stored in your browser and performs functions such as recognising you when you return to our website and helping our team to understand which sections of the website you find most interesting and useful.

Strictly Necessary Cookie should be enabled at all times so that we can save your preferences for cookie settings.

If you disable this cookie, we will not be able to save your preferences. This means that every time you visit this website you will need to enable or disable cookies again.

This website uses Google Analytics to collect anonymous information such as the number of visitors to the site, and the most popular pages.

Please enable Strictly Necessary Cookies first so that we can save your preferences!